Last week we saw how animal were using invisibility in their lifestyle and the many different techniques they used. It is important to understand how the animal kingdom has learned to use such technique since we love to use nature as our source of inspiration. Now that we saw the different kind of invisibility we will dive into the much more easily adaptable technology which would serve the purpose we intend for invisibility.

This week we’ll look into the first one of those possible invisibility method, the active camouflage. This technology is also known under the name of optical camouflage or altered reality camouflage, but I will be using the term active camouflage in this post. Now while we briefly described what Active Camouflage was in the case of an animal, we will discuss what it means for us, how we could implement such a technology and both its advantages and inconvenience.

So, what exactly is active camouflage? An active camouflage is a cloaking device which hides an individual by mimicking it’s surrounding. So for example, let say that you are walking in front of the forest, you would turn the same color scheme as your background, or even as an exact replica of what is behind you, yet as soon as you move, you would change that color scheme to match the new background that lies behind you. Active Camouflage is a technique that is all about tricking the human eye. So in this form of invisibility, you are not invisible at all, instead, you simply copy what is behind you and put it in front of you, this makes it look like you were never there in the first place. You now created a continuous background in front of the observer and it is now impossible for him to detect you. 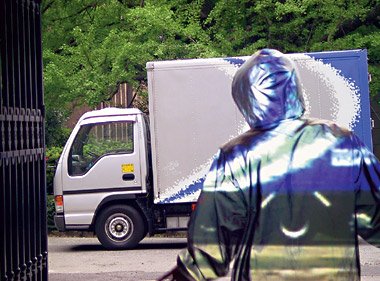 Now how could something like this work exactly? Well we don’t even have to go into deep hypothesis of technological concept, because it has already been done. There are already technology that create really good invisibility cloak using this method as can be seen with the pictures below. They use special highly reflective clothing and a whole bunch of projectors and camera to make it work, here how it happens.  camera is set-up to record what lies behind our man to be invisible, that data is send to a computer, which is then projected on our man with his special coat on. The man has now become a projector screen for what lies directly behind him and active camouflage is therefore achieved.

As you can imagine, there are some significant problem with this method of invisibility, or at the very least the method we are currently employing. While it is true that perfect invisibility could be achieve using this technique, if we were to fully clothes someone in a synthetically perfect reflector fabric, it would still be no where near a real active camouflage invisibility mechanism. After all one of the main criteria for active camouflage was that it could actively change when the background changes. This current functionality works only in one way with this technology, while if the cars and people behind the man were to move, the camouflage would indeed adapt, but if either the person wearing the cloak or the observer were to move, everything goes down the drain. Remember that for this to work the cloak needs to have something constantly projected on him, this means that the moment he leaves the projection, he is only a weirdo with funny attires. Even worse, the invisibility effect only works in a single direction. If you were to move only a few meters to the left or the right, the reflected light would start partially missing your eyes and the effect would be partially lost. If you look at this man from the side, the sky, the ground or the back, you would still only see a man with weird attire.

Active Camouflage is not an impossible way to obtain complete invisibility though, but more development will be needed before we can achieve something we can really call a perfect invisibility device. To achieve 360 invisibility for someone using this technology, we would need to be able to have a portable camera on the individuals, those camera would need to be set-up so they give a perfect panoramic-360 view of the individual wearing the cape. Those camera would have to then be linked to a powerful miniature portable computer on the person which would project the image gathered from the cameras to a holographic 3D projector that would center around the individual-to-be-invisible.  This set-up would allow us to achieve the perfect invisibility that many people are looking for, the problem is, we don’t have access to half of the technologies needed that I mentioned. This is why that for now, the really uni-dimensional and imperfect version of the invisibility cloak using Active Camouflage is has limited as what you can see in the first picture of this post.

Active Camouflage is not the only way to obtain invisibility though, it is merely one of many way to reach it, next week we will venture into a similar avenues, yet a bit different. We will try to see how to achieve invisibility using pigmentation, rather than reflection of an image. Tune in next week for another chapter of Sci-fi of Today: Invisibility – Pigmentation!